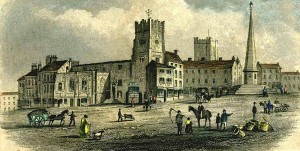 Last Friday I drove up to Richmond, Yorkshire for a dinner with the Fellmongers.

They held the reception and dinner in the Kings Head hotel, a fine old coaching inn on an excellent site in the market place.  I met an old friend, Dr Mark Conroy during the reception – I had last seen him on a Legion pilgrimage to North East India (Imphal and Kohima) in 2005 – when he had provided our medical cover.

Chris and Valerie Dadson, the immediate past master Glover and his wife, were also there – the took part in the Sheep Drive across London Bridge last September with many others from their company.

During dinner I was sat between the Master’s wife and Baroness Harris of Richmond.  They both kept me well-entertained and I learned a lot about the Fellmongers and their charitable activities.  Angela Harris has the Law and Order portfolio in the House of Lords and we exchanged thoughts on prisons, theatre, ordination, and many other subjects.  The Master Draper of Shrewsbury was the guest of honour and he gave a very amusing speech which featured several conjuring tricks – although a dentist by profession he is clearly a magician by inclination!  Then I drove back to south Wales on Saturday morning.