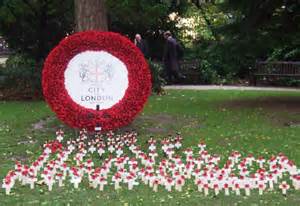 On Monday the City of London Branch of the Royal British Legion held their annual garden of remembrance service outside St Paul’s Cathedral.

A Guards Band played the hymns during the service, the Masters of the Livery Companies sang lustily, and the standard bearers were on parade with their standards.  It was a dry sunny day, but the ground was very damp, and there were several slips as people gingerly made their way across the muddy grass to plant their crosses.

Lord Mayor Locum Tenens Ian Luder represented the City with the sheriffs, and the Dean and Registrar of St Paul’s represented the cathedral, and the Masters of the Livery Companies were all on parade – orders of dress were varied and imaginative – but this is the richness of the variety of the City.  There were representatives of other City institutions there too.  A very nice ceremony to start the week leading up to Remembrance weekend.