It was a great evening on Tuesday night when Janet and I were invited to the Joiners and Ceilers Court of Livery Dinner at Plaisterers’ Hall. 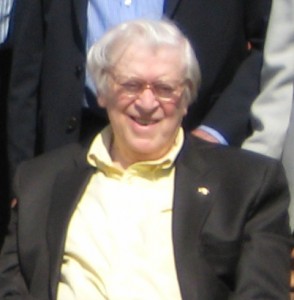 We had a very good time.  Jimmy Perry, script writer for such TV favourites as It Ain’t Half Hot Mum, Dad’s Army, Hi-De-Hi, You Rang Me Lord and many other TV sensations was the principal guest and he spoke very well, and so did the Master, my old friend Tony Bown.

Janet and I were very well hosted by Past Master David Latham and his wife Susan before the dinner; during the dinner Janet sat next to the Master, and I was sat next to Past Master Stewart Riddick and opposite Past Master Clive Turrell, who kept me very well entertained.  It was a great opportunity to catch up with Maureen Marden from the Environmental Cleaners and Jonathan Rowling from the Parish Clerks.

Going back to the club I said to Janet that for the first time I realised my year was slowly drawing to a close and I was going to miss all these dinners and other events.  But we will definitely keep in touch with all the friends we have made.