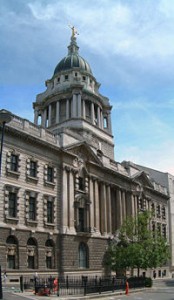 Back to the Old Bailey on Monday night for a reception and “Trial and Error”, a series of sketches about life in the courtroom performed by judges, QCs, various barristers and solicitors and also some professional actors.

A rendering of Mack The Knife was followed by the trial if Major General Harrison, one of the signatories to the death warrant for King Charles the First, who accused his judges if equal complicity, but was nonetheless condemned. Then the trial of Penn and Mead for riotous assembly, followed by excerpts from the trial of Lady Chatterley’s Lover. After which came the trial of the Marquis of Sligo, who followed Lord Byron to the Middle East and collected a stone archway – but was tried for encouraging sailors to desert from the Royal Navy so they could sail his ship and his booty home. He received a lenient sentence from a judge who fawned over his title, and then married his mother as soon as the trial concluded. After an emotional song by Moll Flanders, the first half concluded with the trial of Dr Bodkin Adams – shades of Dr Harold Shipman, only in this case it was the nurse that did it, not the doctor.

The second half started with the song Over the Hills and Far Away – the theme tune to the Sharpe TV series with different words – and then a contemporary description of the judges’ dining arrangements 100 years ago. Then there were excerpts from Dickens – Fagin’s Last Night and Pip’s visit to Newgate Gaol – and Phineas Finn from The Palissers. An excellent and too brief excerpt from One Way Pendulum, in which the witness rapidly becomes a confused accused who is not the man he was some months ago and is challenged by flawed laws of probability as to why he is interviewing a woman in Chester-le-Street about her insurance requirements at precisely 3.15 p.m. on the day in question led into Strange Wares, in which a young squire negotiates the purchase of prisoners from the Newgate galore for work on his plantations.

All rounded off with an enthusiastic rendering of Botany Bay. The evening raise £10,000 for the Sheriffs’ and Recorder’s Fund which helps ex-offenders and their families achieve a normal law-abiding life.