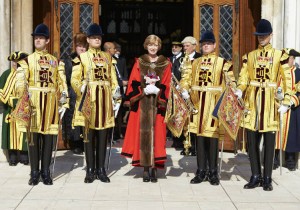 On Thursday I drove back up to London again for the Lord Mayor’s Banquet in Mansion House with Janet – we are regular visitors there now! – and it was another splendid evening, with the Lord Mayor – again.

The Egyptian room was full, and there was a glittering array of tiaras and jewellery – and the women looked very good, too!  Janet and I were seated by Sheriff Adrian Waddingham and Angela, who were very good company, and our old friends Tony Bown and Joanne Bassan, and we were delighted to be able to catch up with them, too.

This blog should carry the headline SHERIFF SAVED THROUGH QUICK ACTION BY MISTRESS WOOLMAN IN MANSION HOUSE FURNITURE DISASTER, because Janet spotted that his chair was about to collapse seconds beforehand and warned him – Adrian moved creditably quickly to avoid injury, and the Mansion House staff found a spare chair and passed it across over the heads of other diners so he was not without a seat at the table for too long.  It was a most enjoyable evening, in great company, with well-worked speeches and all the panoply and pomp of a state banquet – including a fanfare by the State Trumpeters, who then handed over to the Orchestra of the Honourable Artillery Company for the incidental music during the rest of the evening