New apprentices are not usually reported as making history – as recently as 2004 Court Assistant Robert Allen apprenticed his two daughters, Harriet and Sara – and Sara has now become a Freemen through servitude.  Over the years the Company has had many apprentices bound to masters.  But history of a kind was made on the morning of Thursday 17th January this year when Liveryman David Keating bound his two grand-daughters Sarah Jane and Mary Cristalina Lopez Ferreiro apprentices.

Is anyone aware of another instance in the history of the Livery movement when a Liveryman has apprenticed his grand-daughters?

In a ceremony as ancient as the City of London itself, Sarah and Mary affirmed their willingness to be bound to their master by an indenture which not only required their master to provide meat, drink, apparel, lodging and all other necessaries, but also required them to keep his secrets and gladly carry out his lawful commands; “they shall not waste his goods, commit fornication nor contract matrimony, nor play at cards, dice, tables.”  It is not easy to be certain which of the signatories to these indentures are the braver – the master for accepting responsibility for the dress allowances for two stylish grand-daughters, or the apprentices for accepting restrictions on their lifestyles that some would find onerous. 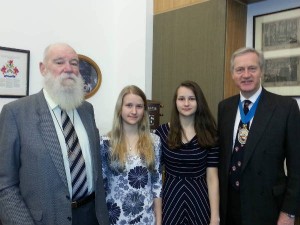 The Master of the Company, Simon Boardman-Weston, and Alderman Peter Hewitt (Citizen and Woolman) attended the ceremony arranged by our Clerk, Gill Wilson, to ensure due decorum and dignity were maintained.  Afterwards Peter arranged for the party to have a very interesting and informative tour of Guildhall.

Any Liveryman or Freeman of City of London Livery Companies may take apprentices but an apprentice may only be bound in a master’s first or ‘mother’ livery company.  Masters may be male or female but are referred to as ‘master’.  A master may take as many apprentices as they like, but individual companies may place a restriction on the number each master is permitted to have bound to them at any one time.  Parents may bind their own children apprentice. But children of freemen and liverymen who, upon reaching their majority, will have the right by patrimony to the freedom of the Company and the City of London, should not be bound apprentice.  (All children born to a Freeman of the City of London are so eligible; but not children born before the Freedom has been received). 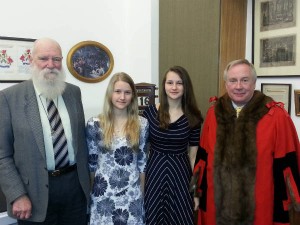 The Master and the apprentice must be present at the binding ceremony which can take place in the Company’s offices or hall, and the Company can design its own ceremony.  The Woolmen are fortunate to have a special relationship with the Guildhall allowing them to use the Chamberlain’s Court.  An apprentice may be turned over to another master who is a freeman or liveryman of the Company if the master is for some reason unwilling or unable to continue as master.  Apprentices who marry during the term may not be admitted to the freedom of the City unless they first petition the Court of Aldermen.

If the master is not in attendance at the Chamberlain’s Court when the apprentice receives the freedom of the City of London, the master should provide written evidence that the term has been properly and fully served.  We have little doubt that Liveryman David Keating will be a kind and conscientious master and that his grand-daughters will be exemplary apprentices.  We look forward to welcoming them into the Company in due course.