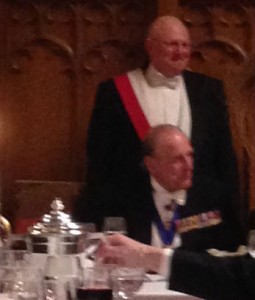 It has been a little quiet of late, partly because of train disruptions into Paddington and the tube strike, but I was up in London yesterday for the dinner at Guildhall to celebrate the presentation of a Royal Charter to the Honourable Company of Air Pilots (formerly the Guild of Air Pilots and Navigators) by the Duke of Edinburgh.

He also presented them with a ceremonial sword with the words ‘What does a pilot need a sword for?’ which was greeted with much laughter, but he did not receive an explanation.  It was a very enjoyable evening  and I was much entertained by Murray Craig, the Clerk to the Chamberlain’s Court, and a couple of Australian pilots, one of whom had been decorated for service in Vietnam (they were from the Hong Kong chapter).

During the reception I met a girl who had been supported by GAPAN through her pilot’s training and was now flying for Virgin, and she gave me the low-down on the new uniform for cabin crew – they are apparently moving from red to champagne – you heard it here first!