The Company has a strong and growing affiliation with the Army Cadet Force Unit, 43 Cadet Detachment, based in East Ham. 43 Cadet Detachment unit, which is badged currently as a Royal Horse Artillery unit, provides opportunities for young people to develop self esteem, leadership qualities and learn about the benefits of discipline and teamwork. The affiliation between the Company and the Unit is governed by a Memorandum of Understanding which provides for an annual funding grant to the Unit to enable it to purchase uniforms and other kit for the Cadets. The MOU also cover reciprocal visiting arrangements between the Company and the Unit, including the opportunity for the CO of the unit to attend the annual Installation Dinner (see below). Members of the Company have attended the Annual Cadets Summer Camp and cadets from the Unit provide support to the Company at the Annual Sheep Drive Read More

The Queen’s Own Yeomanry 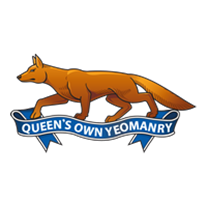 Past Master John Nickell-Lean TD, during his year as Master of the Company (2003/04), arranged an affiliation with The Queen’s Own Yeomanry. The Queens Own Yeomanry is a Territorial regiment which was originally formed on 1st April 1971 as the 2nd Territorial Armoured Car Regiment. It was then established from The Northumberland Hussars (RHQ), The Yorkshire Yeomanry (formerly the Yorkshire Hussars, Yorkshire Dragoons and East Riding Yeomanry), The Cheshire Yeomanry and the Ayrshire Yeomanry. However since that time the Regiment has had changes adding the Sherwood Rangers (which were then promptly lost) and regaining the Ayrshire Yeomanry and most recently bringing in the Fife and Forfar and the Northern Irish Horse. Therefore it has elements in Yorkshire and the north of England, Scotland and Northern Ireland.

The Queen’s Own Yeomanry with its distinctive cap badge of a stalking fox was one of two armoured Reconnaissance Regiments formed specifically with a role in BAOR, to stand against the threat from the East, particularly of a Russian Invasion of Western Europe. Today it serves in a formation reconnaissance role, equipped with the CVR(T) family of armoured reconnaissance vehicles, including Scimitar and Spartan. On mobilisation, the QOY provides squadrons to reinforce the regular formation reconnaissance regiments and has provided personnel to both Operation HERRICK in Afghanistan and Operation TELIC in Iraq. Most of the serving members of the regiment have served with their regular counterparts in the Royal Armoured Corps and other arms and services.

Today the regiment is part of the 15th (North East) Brigade of the 2nd Division. Every year the Worshipful Company of Woolmen presents a silver trophy in the shape of a ram’s head to the Squadron judges by the Commanding Officer to have performed best during the preceding year Read More