Liveryman Judith Donovan CBE is chair of the Greater Ripon Improvement Partnership (GRIP) and was tasked with organising the Olympic Torch celebrations in Ripon on Tuesday 19th June.

With its small winding medieval streets, Ripon was divided into three zones – a family zone for picnics, and family activities; a party zone including the market square, charity stalls and live music; and a civic zone, where the Dean and Chapter, Mayor and Councillors, choristers, and an honour party from the local garrison of Royal Engineers, the Royal Navy and RAF met the torch bearer. 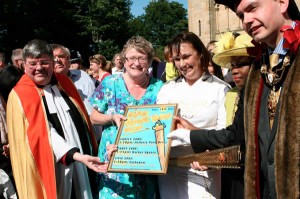 Helen is the Ripon schools sports coordinator and was nominated to bear the torch by all Ripon schools for her successful fight against cancer and tremendous fundraising activities for charity.

Although bureaucrats had allocated her a stretch to run in Harrogate, she was whisked to Ripon as soon as she finished her leg so she could be honoured properly by the people of Ripon and presented with a framed commemorative poster designed by a Ripon sixth former.

Even the weather joined in with the celebrations, which made the day that little bit more special for all who took part.